This week's project made use of another one of the science sets we bought in Maplin's closing down sale (see earlier Electricity Master Lab), the Thames & Kosmos Kids First Biology Lab: 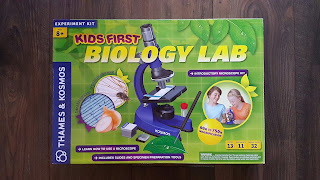 The lab is primarily a microscope, instruction booklet, blank slides and the tools you need to prepare slides. If I had one criticism of the set, it would be the limited number of pre-prepared slides; there's just the one with a sample of wool, silk, and cotton threads. Preparing slides is quite tricky, so it would be nice if there were a few more to look at.

As Solomon was covered in chickenpox we started the week with some Ted-Ed videos on cells and viruses, and how the immune system works. We then watched a video on microscopy and did a number of the suggested experiments, including:

Looking at some cells from a human mouth:
and comparing bacon fat and meat:
We finished the week by watching a video about DNA, and did an experiment from Usborne's 100 Science Experiments to extract the DNA from an onion using washing up liquid, salt, and surgical spirits.
Next week's project: Poetry
Posted by Solomon at 12:45