As it felt as though we had spent far too much time stuck in the house, and Britain was due a mini-heatwave, we decided to have a nature based project this week to get us out and about a bit more.

We pressed some flowers - and then laminated the results:
We created stick fairies, using materials found during a picnic by the lake: 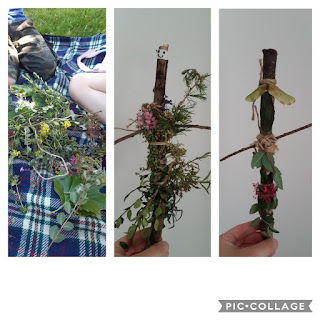 And we did some wildlife spotting and learned about bees using some online resources. .


We also watched a couple of films set in the English countryside: Swallows and Amazons (1974), and Coot Club.

The children enjoyed both the films, and it even prompted Solomon to suggest the Coot Club sequel as the next project.

Next week's project: Arthur Ransome and the The Big Six
Posted by Solomon at 07:26

Email ThisBlogThis!Share to TwitterShare to FacebookShare to Pinterest
Labels: wildlife