It was our fourth Easter as home educators, so an opportunity to revisit some of the previous crafts and activities, as well as doing some new ones (see Project 29: Easter and Spring, Project 81: Easter II, Project 130: Easter III).

There were the usual chocolate nests, as well as our first simnel cake, which everyone enjoyed: 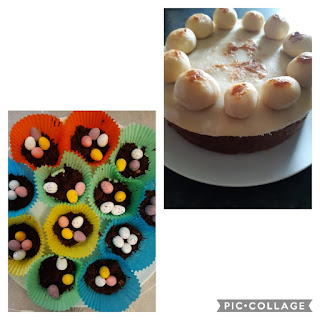 We added to our Easter bunting (for the third year running), made some Easter cards, and even attempted to make a Lego hatching egg: 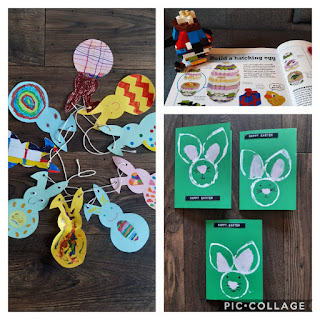 We also revisited the Easter story, explained the traditions of Holy Week, from palm crosses to the washing of feet, and watched a couple of Easter(-ish) films. We watched Ben Hur (the 2003 cartoon version on Amazon Prime):

Risen has a 12A rating, and Amazon suggests 13+ for Ben Hur, although neither are particularly inappropriate for younger children. The ratings primarily reflect the fact that they deal with the subject of Christ's crucifixion in a more violent time.
Next project: Materials

Email ThisBlogThis!Share to TwitterShare to FacebookShare to Pinterest
Labels: easter