Project 11: All about Lego!

As we were going to Manchester this week, we decided to make use of the Legoland Discovery Centre, and explore Lego a bit further.

We started the week by watching The Lego Story, an animated history of the Lego company, and exploring the large number of ways Lego bricks can be put together.


A maths professor has shown that there are 915,103,765 different ways of putting together six standard 2 X 4 Lego bricks, and we set to work exploring the 24 different ways 2 bricks can be put together (which is actually surprisingly tricky!).
Legoland Discovery Centre Manchester was a great day out that kept the kids entertained for hours, with rides, soft play, a 4D cinema, Lego miniland, and build zones. Solomon's favourite bits were the Kingdom Quest lazer gun ride and the 4D cinema that was showing a Nexo Knights' film.

In many ways it was more enjoyable than Legoland Windsor (which we visited last year). Whilst Windsor was good, there was much more walking, queuing, it felt less interactive, and you needed more than a day to get to see everything.


It's worth booking tickets to the discovery centre online for discount prices, and you can also take your own packed-lunch.  If we lived nearby we'd definitely have been tempted by the annual pass.

Finally, when we got home, Solomon and his sister designed their own mini-figures. We'll update the post when the figures arrive!
As always with our weekly projects, there was much more that we wanted to do, but at least with Lego we know we'll be returning to it time and time again for years to come!

Next week's project: Time and Calendars!

UPDATE (16/12/2017)
The Lego Doodlefigs have arrived! The figures only took 3 days to arrive after the scanned images were sent off, it just took us a while to get around to scanning the images. The figures look good but come out quite pale, so it might be better to use felt-tips rather than crayons. 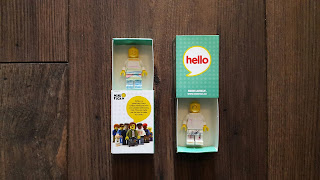