As the 25th of January was Burns night, we decided to have a project on all things Scotland and Robert Burns.

As well as revisiting our own trip to Scotland as part of a journey around Britain (see Project 41: Britain), we made use of a wide range of resources online to explore Scotland, Scottish culture, and Burns' poetry.


The children also had to fill in a country profile for Scotland (previous profiles have been done for Norway and China), and pick a Scots word for an animal and draw it. 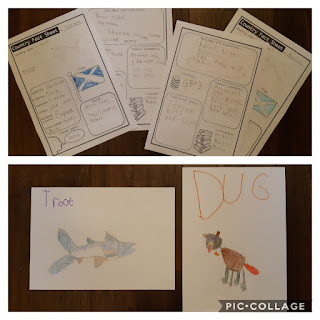 Of course you can't discuss Scotland and Robert Burns without some haggis, so we had a trip to the local Wetherspoons, as well as cooking some ourselves. Solomon was a big fan of haggis, whereas Monica was a bit more wary.  Unfortunately there was a distinct lack of 'neeps' in the local supermarket, which was a shame.

Next project: Birds, birds, birds.
Posted by Solomon at 08:53

Email ThisBlogThis!Share to TwitterShare to FacebookShare to Pinterest
Labels: Scotland