We wanted a relaxed project for this week's project as it coincided with Solomon's birthday, so we settled on knights and fantasy, focusing primarily on the tales of King Arthur.

We made use of numerous online videos to explore what it means to be a knight, and some of their literary depictions.

We also read knightly tales in the form of Morpurgo's Arthur: High King of Britain and McCaughrean's George and the Dragon. Morpurgo just about manages to safely skirt some of the more salacious aspects of the King Arthur stories, although as a parent you do find yourself concerned throughout about what might be coming next! 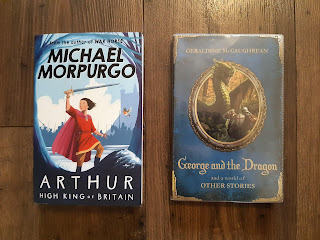 There are obviously also a lot of King Arthur films and we watched two: the classic Sword in the Stone, and the modern interpretation with The Kid Who Would Be King.

Finally, as a craft activity the children designed their own heraldic shields (the elder two had previously designed shields back in Project 100: The Middle Ages). 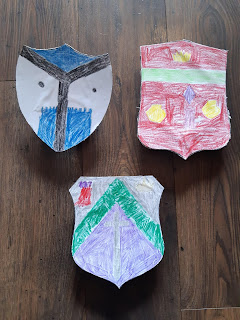