At last we've reached the topic everyone who is home educating young children will do eventually: Dinosaurs! It's a great topic as there are such a wide variety of resources suitable for children of Solomon's age: books, tv series, films, shows, and activities. We used a couple of books, watched Walking with Dinosaurs and Jurassic Park, visited a museum, watched a theatre show about dinosaurs, and Solomon dug a dinosaur out of a lump of  'rock'.

The main book we used was findout! Dinosaurs, part of a series of non-fiction introductory books by Dorling Kindersley. This is a nice quality series with plenty of information, quality illustrations, and an accompanying online web site. The book provides a nice overview of the dinosaur world, types of dinosaur, and the science behind finding out about dinosaurs. As we wanted more information on specific types of dinosaur we came across, we supplemented this with another Dorling Kindersley book: Knowledge Encyclopedia Dinosaur! With so many dinosaurs (as well as pterosaurs and marine reptiles), you inevitably come across ones which aren't in either book, but there's usually one of the same family.

Walking with Dinosaurs (currently available on Netflix) is almost 20 years old, yet it still managed to keep Solomon glued to his seat throughout. After watching the third episode on marine reptiles we visited Peterborough Museum which has an exhibit of Jurassic marine reptiles:
It was nice to put the local exhibition in context, and we decided against a big trip to the National History Museum as we also had a trip to the theatre planned: Dinosaur World Live.
Dinosaur World Live being on at the local theatre is the reason we decided on dinosaurs for this week's project. It's a fantasy puppet show narrated by a girl who was shipwrecked on an island inhabited by dinosaurs, and has brought some of them back. The T-Rex was impressive, and it was nice to be able to go up and touch the dinosaurs at the end, but otherwise we didn't find it to be a particularly exciting show. Hopefully we'll get the opportunity to see Walking with Dinosaurs - the arena spectacular later in the year.

After the theatre trip we watched Jurassic Park on DVD with all three kids (aged 2, 3, and 5). It's always a bit hit or miss with age ratings from 25 years ago, and we weren't sure whether a PG would still be suitable. They all loved it however, and whilst there was the odd unsuitable word, it was a good sort of scary, probably because a dinosaur park is not the sort of place they usually find themselves in!

Solomon also dug out an Archeofun T-Rex he'd been bought for Christmas, and we'd judiciously put to one side. 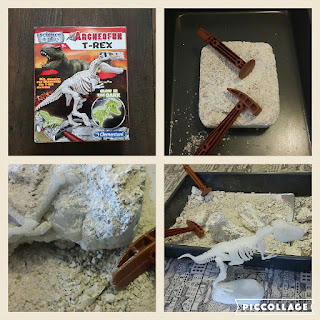 We were surprised at how long the pieces took to dig out, but also how much pleasure Solomon got from it. He probably spent 4 hrs digging the pieces out altogether, and never showed any sign of boredom - even at the end of a mammoth 2 hour session!

Next week's project: Easter and Spring.
Posted by Solomon at 09:13