It was Monica's turn to pick a project this week, and she picked Myths and Legends.

The week started with a discussion of what myths and legends are, and the children were tasked with finding books which fitted the definitions from their bookshelves. Although there were a few false starts, with Beast Quests, modern fairy stories, and The Hobbit selected, eventually we settled on a selection of myths and legends for the week's project.
The Usborne young reading series are a great way to introduce classic tales to the children, accessible with colourful pictures, and ideal for them to read on their own. We didn't cover it this week, but Beowulf has long been a favourite of Solomon's from the series.  Great Stories from British History brings together about 100 tales from British history, with some more rooted in fact (e.g., the Higgs boson) than others (e.g., Gogmagog and the exiles of Troy), again colourful and accessible to the children. In particular we wanted to introduce Hereward the Wake, as it is a legend set in the local area. Finally, Norse Myths:Tales of Odin, Thor and Loki is an anthology for older children with fewer pictures, but one we bought to read with them to help them improve their reading.

As their mother comes from Sunderland, they were also introduced to tales of the Lambton Worm, reading the book, listening to the song, and making their own worms. 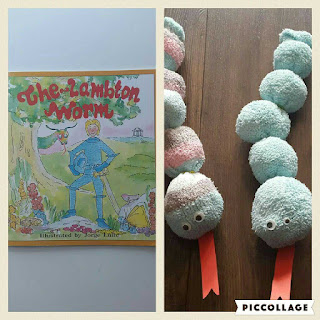 Finally, the children were tasked with creating their own mythical creatures:
Next week's project: More Chemistry! (Following on from Project 19: Science and Chemistry)
Posted by Solomon at 00:44