This week's project was selected after stumbling across My First Classical Music Book in Foyles, which is a great introduction to some classical music for children.
Although the book is recommended for ages 5-7, for those who have not yet been introduced to much classical music I think it is also suitable for those who are older. It comes with a CD, so it's a simple case of popping on the music and reading along with the accompanying notes.

Along with reading the book, we made use of the Ten Pieces resources from the BBC: videos and lesson plans for 30 (originally 10) pieces of classical music. In particular we looked at:


Solomon and Monica created pictures for Mars, the Bringer of War and Ride of the Valkyries, although I think Solomon's night scene with a volcano may have captured the mood a bit better than Monica's unicorn and rainbow picture. 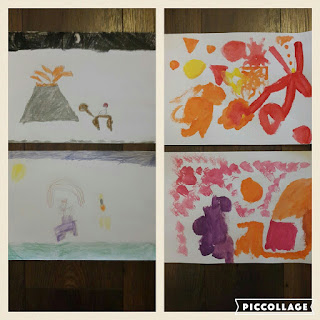 The BBC resources are particularly good because they also provide simple musical scores for various instruments. So the children played the leitmotif from Ride of the Valkyries on the keyboard, accompanied the Waltz of the Flowers with ukuleles as their mother played the flute, and played percussion for A Night on the Bare Mountain.

Classical music is also a great topic for the number of cartoons associated with it, from Fantasia through to A Corny Concerto, and unsurprisingly the cartoons were some of the children's favourite bits of the week.

Of course the only way to finish a week of work on classical music is with The Last Night of the Proms. We watched the proms from 2011 as we had the DVD - and were actually in the audience in those halcyon days before kids!


Next week's project: The Seaside