After the children enjoyed Project 146: A Wrinkle in Time we thought it would be a good idea to look at some theories about light and space a bit more closely. Although we have done projects on light (see Project 107: Light) and space (see Project 8: Space and the Planets) previously, this was a project more about our understanding of space and light, and the change brought about by Einstein's theory of relativity.

It was a project that made use of a lot of videos and a lot of books, although we did finish with a some practical gravitational experiments at the end of the week. 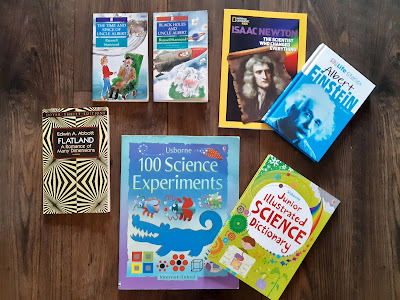 There were a number of different strands to the week's work.

2) We explored the theory of relativity and some of its unexpected behaviours as you near the speed of light with The Time and Space of Uncle Albert, multiple online videos, and the classic 1980s film The Flight of the Navigator.

4) And finally we read about, and did some simple experiments on, our more usual experience of gravity with Usborne's Junior Illustrated Science Dictionary and 100 Science Experiments. 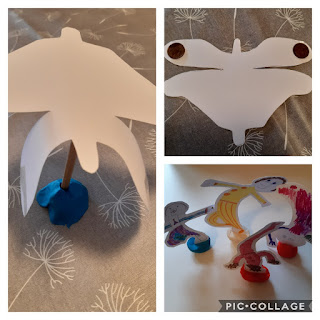 In the back of The Time and Space of Uncle Albert there was a quiz on the theory of relativity, and the  children's combined efforts achieved a score of 15 out of 18, so we can rest assured they picked up something over the week. Obviously with children aged 4, 6, and 7, we don't expect them to remember everything, or come up with a theory of everything, but we do like to put certain ideas and concepts on their radar for future reference.

Next project: Mushrooms and Fungi.