Often communism and the cold war are touched upon in other books that we have read or films that we have watched, so it seemed like a good idea to introduce the topic in an accessible manner in the form of Animal Farm and the Russian revolution.
We  read both the original book, and a graphic novel version to make it more accessible to Sam. 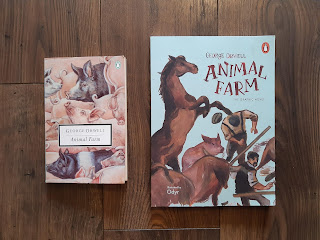 They were given a presentation on the connections between Animal Farm and the Russian revolution, with Solomon particularly enjoying the OverSimplified introductory videos:
Finally we watched the 1954 Animal Farm animated film, which all the children enjoyed. Although its differences to the original work did seem to reflect the CIA's financial contribution.
Next project: Shapes
Posted by Solomon at 02:08