This project was a last minute substitution. We had originally planned to read The Neverending Story by Michael Ende, as the film was available on the iPlayer, but when the book arrived we quickly realised that it was not going to be suitable for us to get through 500 pages in a week if we read it together. So, A Dog So Small was picked instead, as the number of pages was more reasonable and the children had enjoyed Tom's Midnight Garden by the same author previously (see Project 135: Tom's Midnight Garden). 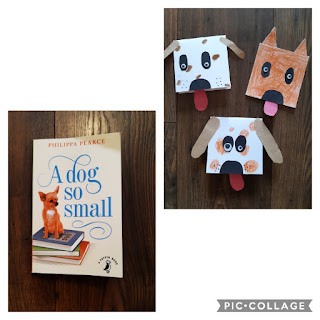 Most of the week was spent with reading and discussing the book, and types of dogs more generally. Although there was time for a dog craft as well.  All the children enjoyed the book, and it's a nice exploration of how getting what you wish for might not turn out as expected.

There wasn't A Dog So Small film to accompany the book, so instead we watched an alternative film about a chihuahua, albeit one in a very different setting:

Next Project: The Alps